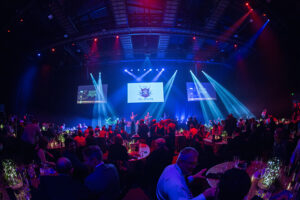 Into their 14th year, the IPWEA NZ Engineering Excellence Awards recognise and celebrate the often invisible efforts and achievements of the exceptional people working in local government, central government, consultants, contractors and suppliers around New Zealand. Their work helps our communities to thrive – managing our infrastructure assets. A new fifth award category was added this year – the Excellence in Environment and Sustainability Award – sponsored by the great people at Morphum Environmental.

The Sea Level Rise Exposure Study prepared by Tonkin + Taylor for Local Government New Zealand (LGNZ) won the Excellence in Strategic Planning Award. A first for New Zealand and possibly the world, this report for LGNZ estimated the quantity and replacement value of local government-owned infrastructure exposed to sea level rise, and provided guidance and recommendations for the local government sector in order to manage and address these issues. It was designed to provide quantitative evidence, clear focus and an imperative for action on an issue that affects all coastal councils and communities in New Zealand.

Dunedin City Council, WSP Opus and Downer jointly won the Excellence in Maximising Asset Performance Award for their Ross Creek Reservoir Refurbishment project. Ross Creek Reservoir in Dunedin is the oldest large earth dam in New Zealand. Opened in 1867, it was created to provide water for Dunedin as it rapidly expanded due to the Otago goldrush. The reservoir, dam and valve tower have a Heritage New Zealand ‘Historic Place Category 1’ classification. This efficiently-delivered refurbishment project is a fine example of maximising asset performance. This work has saved an important New Zealand structure from decommissioning and enhanced the resilience of Dunedin’s water supply.

Hamilton City Council and Beca received a Highly Commended in the Excellence in Maximising Asset Performance category. Their successful project was the development of a digital asset information model for the Pukete Waste Water Treatment Plant in Hamilton. Beca developed the asset information model as a record of the asset and to support on-going operation and maintenance activities. Several technology solutions were implemented including the use of; Drones to capture site-wide geometry, laser scanners to capture building and asset geometry, 3D modelling tools to develop Building Information Models, web-based integration tools to create the asset information model and mobile devices to link the digital assets to barcodes on the physical assets.

Wellington City Council, Wellington Water, GHD and Brian Perry Civil were joint winners of the Best Public Works Project under $5 million for their Dixon Street Pumping Station and Rising Main project. Central Wellington is set for huge growth, with a population increase of 12 percent expected over the next 30 years.

GHD was engaged by Wellington Water to carry out the investigation, design, tender and contract supervision for a new wastewater pump station and associated pipework, under Victoria and Dixon Streets in Central Wellington. Constructed by Brian Perry Civil, this project is the first pump station to be constructed in Central Wellington in over 40 years. This enables Wellington Water to provide wastewater services to a growing population, and relieves pressure on other pump stations around the city, reducing the chance of overflows into the harbour.

The Kuaka Gateway project at the Northern entrance to Napier was the winner of the Best Public Works Project over $5 million. This work at the Watchman Road Intersection has significantly improved safety at a previously dangerous intersection, and delivered on the varied aspirations and needs of multiple funding agencies and an extensive and divergent array of stakeholders. The project was funded by NZTA, Napier City Council and the Hawkes Bay Airport, with consultants WSP Opus and Stantec, and contractor Higgins, carrying out the work. A deliberately best practice approach to environmental planning, engineering and landscape design, built-in Te Aranga principles, and an outcomes-based approach to stakeholder engagement, showed how major infrastructure projects can be designed and delivered with net positive impacts even within the most sensitive sites.

Tūranga is the new Christchurch city central library and was a runner up in the Best Public Works Project over $5 million category. The building was constructed for Christchurch City Council by Southbase Construction, with engineering and architectural consultancy provided by AECOM, Architectus, Lewis Bradford and Powell Fenwick. The library is one of the nine anchor projects that are crucial to the redevelopment of Christchurch following the four major earthquakes. Spread out over five storeys and 9,500 square metres, Tūranga is a visually stunning symbol of hope, unity and rebirth that shapes the way residents and visitors experience Christchurch’s city centre. Tūranga celebrates diversity and culture, creating a social hub for information, innovation and entertainment.

The Te Ara Kahikatea roading project in Hastings was another runner up in the Best Public Works Project over $5 million category. Consultants GHD, Stantec and Mitchell Daysh provided engineering design of the works for Hastings District Council, and the project was constructed by Higgins. Key groups that provided community input to the project were the Whakatu Community Liaison Group and Te Taiwhenua o Heretaunga. The design of this road, Te Ara Kahikatea, had significant input from the Hastings Community, starting with a truly blank page. The experts – engineers, project managers and financial managers – were constantly available to the key stakeholder committee for support and advice, but the location of the route, from start to finish, belongs to the community.

The Inaugural year of this Award category, the Excellence in Environment and Sustainability Award sponsored by Morphum Environmental was won by the Cromwell Waste Water Treatment Plant project. This project was carried out for the Central Otago District Council by consultants, Harrison Grierson and CH2M Beca, and contractors Fulton Hogan, Downer and Southwater.

The needs of the Central Otago District Council’s environment and growing Cromwell community were identified, addressed and future-proofed through the delivery of this project. A wealth of experience and clever innovation were brought together to achieve the best possible outcomes for both the community and local environment. The improvement in the quality of wastewater discharge because of this project will have a long-term positive impact on the quality of the local river and lake water.

A huge congratulations to all of the winners of this year’s Excellence Awards, we greatly appreciate your service to New Zealand communities.