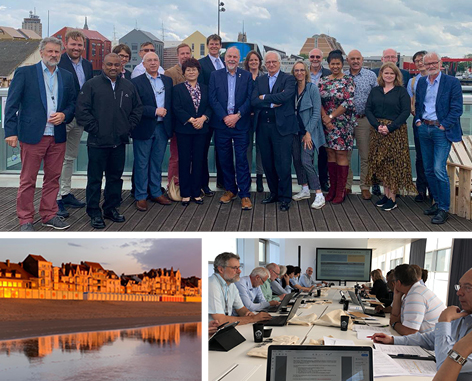 A positive and productive IFME meeting and AITF conference was held in Dunkerque in June with many of the participating IFME member countries including UK and Scotland, The Netherlands, Sweden, Finland, Iceland, Italy, France, Australia, New Zealand, Canada and the US and China present.  The new and direct leadership of John Thomson from UK/Scotland is improving the outcomes and objectives of these meetings. (see picture below.)

Four technical subcommittees also met during the IFME meeting to progress objectives in key areas of Asset Management, Technical, Communication and Leadership.  NZ (Priyani de Silva Currie and Samantha Gain) are represented on the Technical and Communication sub committees.  The next IFME meeting is in China in October 2019.

Dunkerque is a lovely city in northern France and delegates had the opportunity to visit many of the local attractions and also view some of the notable remnants and memorials of the Battle of Dunkerque. De Silva-Currie was particularly impressed by the development of the Promenade area which is undergoing an extensive improvement, but also reminds viewers of the sombre events of Operation Dynamo that took place there on 4th June1940 where 338,226 allied soldiers were evacuated from the beaches during WWII.

Technical tours of Zeebrugge and Brugge hosted by ARDIC were undertaken with visits to the Port of Zeebrugge, and a Military Naval Base.  In Brugge a three hour walk around the historical township was nearly enough to take in all the beauty, but poor weather dampened any enthusiasm for more sightseeing, redirecting the delegates touristic endeavours to chocolate making and beer brewing establishments.  The day ended with a hosted evening function at one of the underground fort battlements in Dunkerque.

Robert Service (Asset Manager Taupo District Council) and Priyani de Silva-Currie Regional (Leader Asset Management Calibre Consulting Group) spoke at the AITF conference which was translated into English (very interesting to watch the French translation up on the big screen) during the presentation.  Their presentation asset management and social housing policy reform within a circular economy, was well received by an enthusiastic audience.  There was much interest and debate in the types of service levels being provided and did this meet current and future affordable safe and secure and fit for purpose housing needs for our most vulnerable people.  These issues being relevant globally and with an aging world population.  The conference delegates intently questioned New Zealand’s first wellbeing budget which signals a complete change from normal economic and fiscal prosperity indicators to measurements based on caring, kindness and empathy delivered in policy change by all government departments.  As a world first approach, it will be keenly watched for its success in the areas of housing, child poverty and mental health in particular.